WELCOME TO FURS-DAY FEATURE. SINCE, I LIKE TO READ BOOKS ABOUT DOGS AND OTHER ANIMALS, I DECIDED TO BLOG ABOUT THEM IN A SEPARATE BLOG POST ON RANDOM THURSDAYS.  IF YOU HAVE READ A GOOD BOOK ABOUT A FURRY FRIEND OR WITH A FURRY FRIEND IN A BOOK, FEEL FREE TO JOIN ME! DON’T FORGET TO LINK MY BLOG TO YOUR POST.

Maria Goodavage’s new book, Doctor Dogs, is full of amazing dogs that can do amazing things.  I had previously heard of dogs that could detect seizures, low blood sugar, and help with PTSD but I had no idea how they did it and the numerous other ways dogs are helping those with medical disabilities. Did you know dogs cant detect cancer by smelling a person’s saliva??  This book goes into the research behind training these dogs to help others.  The author makes reading all the facts and research interesting by intertwining real life stories of dogs and their owners. Many of these stories start out so heartbreaking but end up with a happy tail (see what I did there?). This book has inspired me to look into getting a therapy dog for the school I work.  A therapy dog would benefit so many of the students I work with. After reading this fabulous book, I am excited for what the future holds in the medical field and the role dogs will play. Doctor Dogs comes out October 1st.

This is the fourth book by Maria Goodavage that I have read about dogs and the ways they benefit society.  Her first two books were on military dogs and the role they play in saving soldiers’ lives. The third book was on dogs that protect the President of the United States.

I interviewed Maria a couple years ago.  Check it out below.

I first “met” Maria Goodavage when I read her first book on military working dogs, Soldier Dogs-The Untold Story of America’s Canine Heroes. This opened up a whole new world to me.  Of course I knew there were dogs in the military and on police forces.  I have traveled enough to see dogs in airports and as border control. But I had no idea the IMPACT these dogs have in the military especially over in the Middle East and how smart and hard working these dogs are.  Ms. Goodavage’s second book, Top Dog-The Story of Marine Hero Lucca, cemented my love and respect for military working dogs and Maria Goodavage. 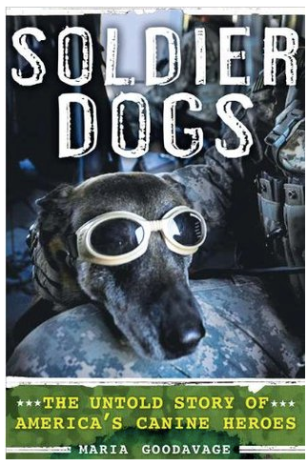 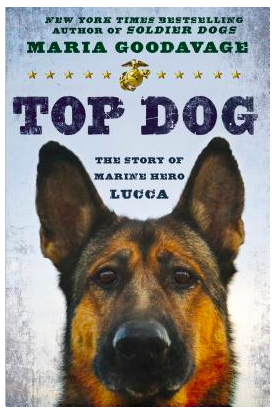 Her third book, Secret Service Dogs-The Heroes Who Protect the President of the United States, was just as informative and fascinating as her first two books. These Secret Service dogs travel the world, where the President, First Lady, or Vice President goes, a dog goes too.  They are used to sniff out convention centers, hotels, restaurants, etc. for bombs and explosives. Every single visitor to the White House is screened by a dog, but never realize it.  Vehicles that enter the White House complex are searched over by these dogs’ noses. There are even dogs called Friendly Dogs. These are the dogs that don’t look like German Shepherds and the Belgian Malinois (the usual dogs of choice by the military and police). The Friendly Dogs look like normal house hold pets and are walked by the Secret Service through crowds around the White House.  These dogs don’t look as threatening to tourists but they are still busy sniffing out bombs, guns, and explosives.

These dogs are even used to chase down people who jump the White House fence.  The book talks about Hurricane and Jardan and how they chased down a fence jumper even after they were being kicked and punched.  Check out a video of that moment below.

Like her other two books, Ms. Goodavage talks about the extensive training these dogs go through and their relationship with their handlers. This is always my favorite part of the book.

“These animals will gladly run into a hail of gunfire giving their life to do their job.  All they ask in return is for you to throw the ball with them, pet them, and talk to them in an embarrassing high voice like they’re the best toddler in the world.”

This is your third book on working dogs. Where did you get the idea to do a book on Service Dogs?

Many military dog handlers have spoken to me with great pride about their work supporting the Secret Service at large-scale, high-security events like the UN General Assembly. I realized I’d never heard anything about the Secret Service having dogs, so I decided to find out more!

Do you have dogs? If so, how many, what kind, and what are their names?

Yes, I have a wonderful, loving, hilarious, gentle giant of a yellow Lab. He’s 10 months old. He has a very special story. Gus is a Kory Wiens and Cooper memorial puppy—a living memorial to a fallen soldier and his dog. He was born on New Year’s Eve last year, and given to me nine weeks later by the father of Army dog handler Kory Wiens, who was killed by an IED along with his yellow lab, Cooper, in Iraq in 2007. I didn’t have the fortune of knowing Kory, but he was an important part of my book Top Dog. His father and I kept in touch after our interviews. I was very moved when he offered me a pup from the memorial litter. Our dear adopted yellow Lab, Jake, had passed away in January of 2015, and I was finally thinking about adopting another Lab, so the timing was excellent—except for getting a lively puppy a month before the deadline for this book!

Where do you write? Are there snacks and beverages involved? If so, what are they?

I have a small, delightful writing cottage in my backyard in San Francisco. It’s only 6×8, but it has been my HQ for Soldier Dogs, Top Dog, and Secret Service Dogs!

My dear husband, realizing that I can spend up to 20 hours a day in there when I’m up against a tight deadline, bought me a little fridge and a microwave as I got underway with the writing for Secret Service Dogs. I made caffeinated tea nonstop (I also have a tea kettle), and kept the fridge stocked with half and half for it, and with fresh fruit salads, delicious cheese, and leftovers! The freezer had some surprisingly tasty microwavable meals on deadline. (We don’t have a microwave in the house, so it was a treat!) And of course there’s chocolate. Reporters in the old days were known for keeping a bottle of something hard in their file cabinet. That’s where I hide my stash — of chocolate!

If only I had a Port-a-Potty and a tent, I’d never have to go inside the house on deadline! It’s very distracting for me in there, and easy to get off track.

What is the hardest part of writing for you?

Starting. Sitting down to write those first several hundred words is always really hard. It’s extremely helpful to have a well-honed outline, but I find it daunting to start writing a new book. I’ll usually procrastinate for a few days, but every day counts because I’ve had very tight deadlines for my books on working dogs. Eventually the pressure gets big enough that I have no choice but to sit down and start. Once I’m over the “blank page phenomenon,” it gets substantially easier.

What is the best thing about being an author?

Doing the in-person research! I’m so lucky that I write about a topic I love. Getting to hang out with military and Secret Service dogs and handlers and learn their stories and watch them work and train is pretty amazing.

What do you want most for readers to get from this book?

I’m happy to have shed light on the incredible world of Secret Service canine teams. They work so hard, and until now they’ve pretty much worked in the shadows. Most of these handlers would like the world to know about their dogs. They’re very proud of them, as they would be their own kids.

I hope the book will help people to become aware of the importance of keeping the Secret Service canine program well funded and robust, especially in this age of increased global terrorism. There’s nothing like a highly skilled dog team to help thwart danger in its tracks.

What is one trip you have never taken but would really like to someday?

I feature a Secret Service dog handler from Cambodia in this book. After seeing photos and reading a great deal about the country, I would like to go there. I was on a live Facebook feed on VOA Cambodia the day the book came out, and heard from several Cambodians who sent me more photos of their beautiful country. Maybe I’ll combine it with a trip to Vietnam and Thailand. If I didn’t have my Gus here missing me, I might have to include Australia and New Zealand in that trip, but that will have to wait for another time.

Who is the most famous person you have ever met?

I actually sort of directed Ed Asner in a short children’s video I wrote and co-produced. What a great guy! The show he starred in, The Lou Grant Show, was the reason I became a journalist! Meeting him was like a dream come true. He played the voice of “Joe the Dog” in our video, Here’s Looking at You, Kid! It won a top kids’ video award, and is still for sale, in DVD form: http://amzn.to/2e2nz6g

Probably the most famous celeb I’ve actually had a conversation with fairly recently has been Jon Stewart back when I was a guest on The Daily Show for my book Soldier Dogs. And the most famous, iconic person in “history” would be Clint Hill, the revered Secret Service agent. I am very honored that he wrote the Foreword to Secret Service Dogs.

What is the best piece of advice you have ever received in your life?

My dad, also a book writer, always said that if you can do what you love, it doesn’t really feel like work. He was so right! I can work seven days a week, long, long hours, and it’s hard, but because I love what I do, it’s never onerous. I always feel lucky to be doing what I do.

Veteran journalist Maria Goodavage is the author of the New York Times bestsellers Soldier Dogs: The Untold Story of America’s Canine Heroes, and Top Dog: The Story of Marine Hero Lucca. She lives in San Francisco with her family and yellow Lab, Gus.