LA LA IN THE LIBRARY and I are participating in the DOG DAYS OF SUMMER Reading Challenge. We will be reading books about dogs and we are going to be doing dog themed activities on our blogs for the entire month of August! Be sure to check out our DOG TAG post and La La’s Dog movie post HERE!!!!’

I am starting with my pupdates for this post. Trixie is still doing well and has been enjoying our cooler temperatures outside.  I also took a photo of her sleeping because she always looks so peaceful and relaxed which makes me feel like she is happy here. 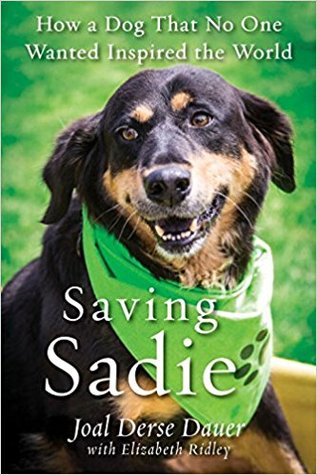 I read two dog books this week.  One was called Saving Sadie. It was a wonderful book about a dog who was left for dead in the mountains of Kentucky.  She had been shot twice, once in the head and once in the back.  Because of this, Sadie couldn’t walk on her back legs.  Sadie was at a shelter when Joal Dauer noticed her. Joal took Sadie home so that she wouldn’t have to live out her life in a shelter.  After a recommendation that Sadie should be put down, Joal decided that Sadie deserved more. “Sadie did not deserve the cruel and she’d been dealt in life.  I assumed her only ‘crime’ was to continually give birth to litters of puppies for her owner, until she was no longer needed, and then they shot her in the had and abandoned her in the woods to die.  Sadie desperately deserved a second chance in life, and I was determined to be the one who gave it to her.”

I was amazed at Joal’s dedication to helping Sadie not only walk again but gain confidence in herself and humans again.  Because of Sadie and Joal’s hard work and determination, Sadie soon became a beacon of hope for other animals and humans that needed a second chance.

“I often felt that Sadie understood the fate she had been saved from, and having that awareness allowed her to appreciate life so much more than most humans do.  Animals, especially animals like Sadie, have so much to teach us about our own lives, if we would only listen.”

This was a great book about friendship, sacrifice, and love between a dog and her owner.  I have been keeping up to date on Sadie through social media.   She is on Facebook and Twitter. Or you can go to her website SavingSadie.com

Saving Sadie releases at the end of September. 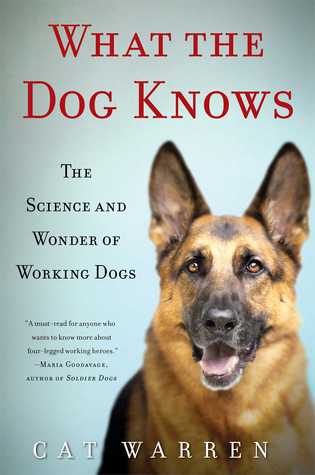 The second book I read was What the Dog Knows. It talks about how working dogs are raised and trained to do all sorts of jobs that help and protect the public.  Even though there are many kinds of service dogs, this book focused on the type of service dog the author trains, which is a cadaver dog.  There were many interesting facts and stories but I found myself skimming over much of the book.  I enjoyed reading the parts about the author getting her German Shepherd puppy and the many hours of training it.   Some of the other parts of the book were a bit dull.  Below, I am posting photos of three amazing books about service dogs. 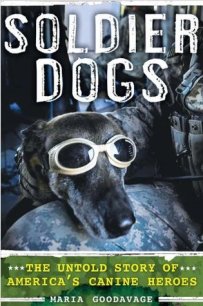 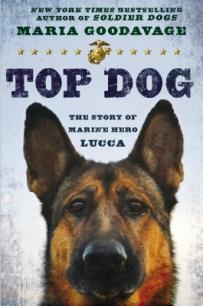 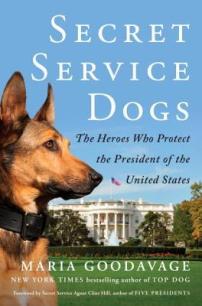 If you are interested in books about Service Dogs, Maria Goodavage is the expert! She has written three books about service dogs.  About a year ago I had the privilege of interviewing her.  Here is what she had to say.

This is your third book on working dogs. Where did you get the idea to do a book on Service Dogs?

Many military dog handlers have spoken to me with great pride about their work supporting the Secret Service at large-scale, high-security events like the UN General Assembly. I realized I’d never heard anything about the Secret Service having dogs, so I decided to find out more!

Do you have dogs? If so, how many, what kind, and what are their names?

Yes, I have a wonderful, loving, hilarious, gentle giant of a yellow Lab. He’s 10 months old. He has a very special story. Gus is a Kory Wiens and Cooper memorial puppy—a living memorial to a fallen soldier and his dog. He was born on New Year’s Eve last year, and given to me nine weeks later by the father of Army dog handler Kory Wiens, who was killed by an IED along with his yellow lab, Cooper, in Iraq in 2007. I didn’t have the fortune of knowing Kory, but he was an important part of my book Top Dog. His father and I kept in touch after our interviews. I was very moved when he offered me a pup from the memorial litter. Our dear adopted yellow Lab, Jake, had passed away in January of 2015, and I was finally thinking about adopting another Lab, so the timing was excellent—except for getting a lively puppy a month before the deadline for this book!

What is the best thing about being an author?

Doing the in-person research! I’m so lucky that I write about a topic I love. Getting to hang out with military and Secret Service dogs and handlers and learn their stories and watch them work and train is pretty amazing.

What do you want most for readers to get from this book?

I’m happy to have shed light on the incredible world of Secret Service canine teams. They work so hard, and until now they’ve pretty much worked in the shadows. Most of these handlers would like the world to know about their dogs. They’re very proud of them, as they would be their own kids.

I hope the book will help people to become aware of the importance of keeping the Secret Service canine program well funded and robust, especially in this age of increased global terrorism. There’s nothing like a highly skilled dog team to help thwart danger in its tracks. 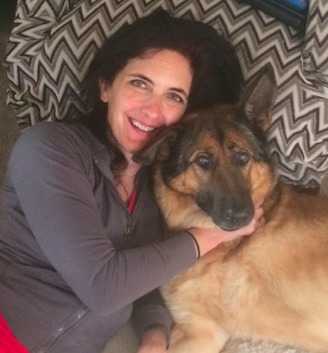 Veteran journalist Maria Goodavage is the author of the New York Times bestsellers Soldier Dogs: The Untold Story of America’s Canine Heroes, and Top Dog: The Story of Marine Hero Lucca. She lives in San Francisco with her family and yellow Lab, Gus.